Diabetes is a chronic metabolic condition marked by high levels of glucose in the blood stream. It is caused either
by an inability of the body to produce insulin (a hormone made by the pancreas to control blood glucose levels) or
by the body not being able to use insulin effectively, or both. There are two main types of diabetes; these being:

Type 1
A commonly autoimmune disease (1A), previously termed juvenile onset diabetes, resulting in a severely reduced
capacity by the pancreas to produce insulin. People with Type 1 diabetes require daily insulin replacements in order
to survive, except in the case of pancreatic transplant. It is estimated that there are 12 cases of Type 1 diabetes
per 100,000 people in Australia.

Type 2
The most common form of diabetes, generally having a later onset compared to Type 1 where the body still produces
insulin but in inadequate amounts or cannot use it effectively. The onset of Type 2 diabetes is heavily influenced
through certain genetic and lifestyle factors such as family history, physical inactivity, being overweight or
obese, dietary choices and smoking status.

Before Type 2 diabetes progresses into a chronic disease state, the body will enter in to a ‘pre-diabetic’ state also
known as pre-diabetes or impaired glucose tolerance. This state is reversible if detected, treated and managed
early.

Almost 1,000,000 adult Australians or just over 5% of the adult population are living with Type 2 diabetes.

Symptoms of diabetes may include:

Severe symptoms of uncontrolled diabetes can include:

How is Diabetes diagnosed?

Diabetes may be suspected if random or fasting blood glucose levels are >5.5mmol; this is determined by testing a
person’s venous blood sample through a finger-prick test or blood test. Listed below are the blood glucose level
ranges and clinical reasoning for diagnosing someone with diabetes:

Your GP may have also told you about your HbA1C% levels during your last blood test, this is an average measure of
your blood glucose levels over the last 3 months. People with diabetes levels under 7.0% are considered
well-controlled; below is a chart for reference: 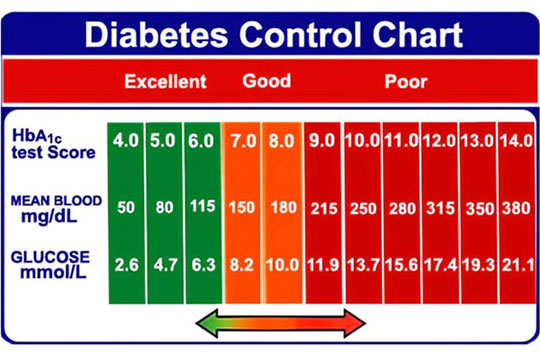 Literature shows that dietary intervention, exercise/physical activity and prescription medications are the best
management principles supported by the most amount of evidence in clinical studies for all types of diabetes.

Based on the evidence, a minimum of 210 min per week of moderate-intensity exercise or 125 min per week of vigorous
intensity exercise with no more than two consecutive days without training is recommended. It is further recommended
that two or more resistance training sessions per week (2–4 sets of 8–10 repetitions for 8-10 exercises per session)
should be included in the total 210 or 125 min of moderate or vigorous exercise, respectively.

It is also recommended that, due to the high prevalence and incidence of comorbid conditions in patients with T2DM,
exercise training programs should be written and delivered by individuals with appropriate qualifications and experience
to recognise and accommodate comorbidities and complications.